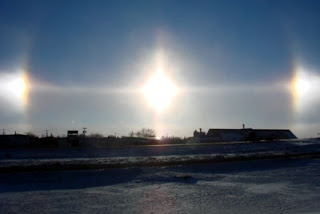 Up and down the streets of Carrington, you can see mountains of snow rising as high as some of the buildings. Having only lived in Carrington for four years, I'm not used to such an abundance of the slippery cold white stuff! It has been quite an adjustment, learning to live safely with a minus-fifty-degree chill factor at times. I've taken the advice of a columnist in the Jamestown Sun who suggested that everyone should have a survival kit tucked away in every vehicle. In fact, I quoted his list on CarringtonNews.Com and have tried to gather and store many of his suggested items in all our vehicles.

I thought it would be interesting to share some cold weather stories that have happened to friends and relatives around Carrington. As for me, I'll never forget the first time that I saw sun dogs! No one had ever told me about a natural phenomenon where you could see three suns in the sky at once. I was so astonished that I practically ran off the road, momentarily thinking that the end of the world must be near! No one along the Carrington streets seemed to be reacting to the images of three suns, though, so I decided not to be frightened and took some good pictures of the event instead.

Later I learned from Wikipedia that "a sun dog or sundog (scientific name parhelion, plural parhelia, for "beside the sun") is a common bright circular spot on a solar halo. It is an atmospheric optical phenomenon primarily associated with the reflection or refraction of sunlight by small ice crystals making up cirrus or cirrostratus clouds. Often, two sun dogs can be seen (one on each side of the sun) simultaneously." In fact, there are many instances of sun dogs mentioned throughout recorded history, as far back as ancient Egypt and Greece, where they are described with awe.
Note: The sun dog picture was taken at the intersection of Highways 200 and 281.
Please feel free to post comments and/or stories about Carrington winters.
Posted by Judy Keller at 1:36 AM