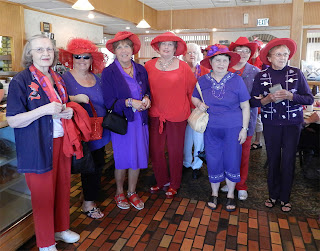 What a delightful group of ladies! I was having lunch at the Prairie Inn today when I noticed all the spunky women with colorful red hats and purple outfits. I thought to myself, "I would love to be a part of that group!" So, I took out my handy camera, went over to introduce myself and was immediately thrilled and impressed with the fact that they didn't run away from my camera, and didn't mind taking a minute to pose for me. They were all very gracious, and I found out lots of fascinating facts about them and the Red Hat Society. 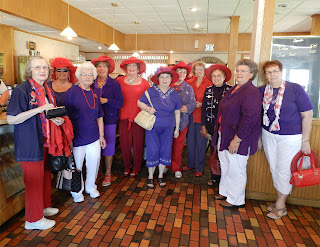 Information That I Found Online...

One of the premier women's social organizations in the world, the Red Hat Society® based in Fullerton, CA, began with the gift of a red hat and has grown into a universal symbol for women around the globe as they victoriously celebrate turning 50 and entering into the next phase of their lives. The social message behind the first red hat has resonated with millions of women around the globe regardless of race, creed, occupation, age or socio-economic status. Today, it is commonplace to see Red Hat Society® members out frolicking and embracing life to the fullest in their now famous symbol, the "red hat."

In the fall of 1997, on a trip to Tucson, AZ, Sue Ellen Cooper impulsively paid $7.50 for an old red fedora in a thrift shop. When a good friend was nearing a "fifty-ish" birthday, Sue Ellen cast about for an idea for an original gift. Inspired by a well-known poem, Warning, which begins "When I am an old woman, I shall wear purple, with a red hat which doesn't go and doesn't suit me. " She wanted to encourage her friend to grow older in a playful manner. She gave her friend a red hat of her own suggesting that she keep it as a reminder to grow older playfully - on her terms.

The symbolism behind the red hat had a profound impact on women Sue Ellen encountered. Those women responded by donning their own red hats and entering a new women's movement embracing a renewed outlook on life filled with fun and friendship, fulfilling lifelong dreams.

NOTE: The ladies that I met today at the Prairie Inn were from Harvey, Fessenden, Bowdon and New Rockford, but no one from Carrington. Does this mean that there is not a Red Hat Society in our town? I would be interested to know, so if anyone has that information, please comment below.

By the way, if you haven't read Jenny Joseph's poem , which was the catalyst for creating the Red Hat Society, take a look:

Posted by Judy Keller at 5:35 PM No comments:

Sponsored by Dick and Gail Paulsen, their 2nd Annual Apple Pie Contest took place on the evening of August 26, 2011. 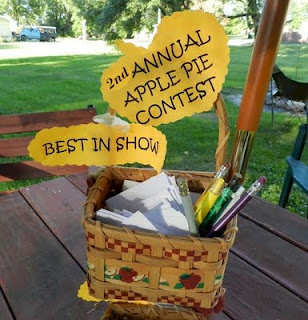 Contestants and friends arrived and enjoyed the pleasant summer evening while getting ready for the contest. 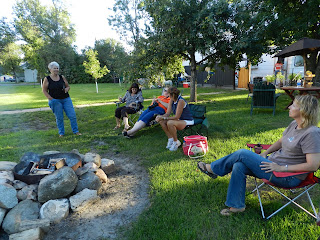 Everyone talked excitedly about their recipes, while they visited and enjoyed a barbeque/potluck supper which preceded the event. 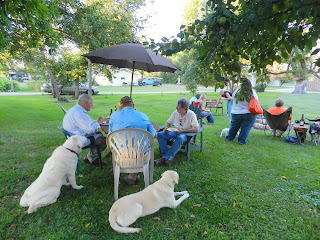 The Paulsen's daughter, Leslie, had fun setting the stage for the contest, artistically arranging all the entries on a picnic table with voting materials close at hand. 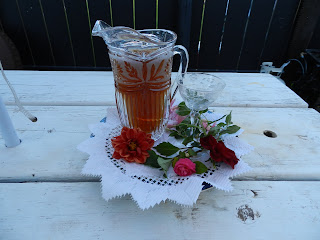 Next, everyone lined up to get their first glimpse of the apple pie entries, and proceded to vote on the presentation aspect of each entry. 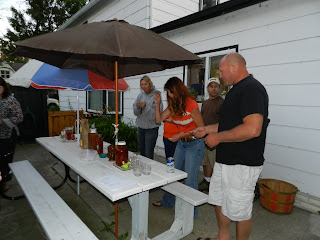 As you can see from the photos, the apple pie for this contest did not consist of your traditional, flaky-crusted pie, but instead consisted of a liquid version that supposedly "tasted" like apple pie. 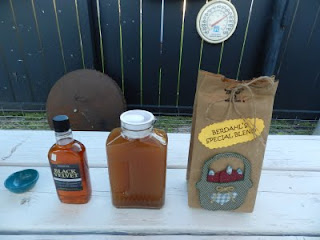 Naturally, in order to judge the flavor of each entry, everyone proceded to enjoy the next step of the contest which was the tasting of each concoction. 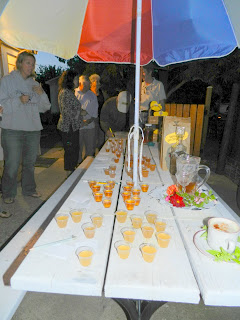 Since everyone at the event became a judge, there was quite a bit of circling the table, tasting-tasting-tasting, chatting and voting. 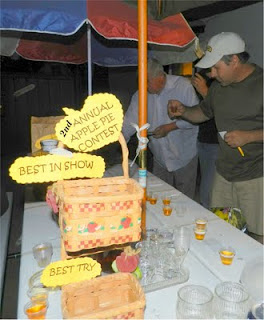 After this quite-festive part of the evening, everyone went back to settle around the fire, talk about the flavors of the entries, and wonder which apple pie would be the grand winner. 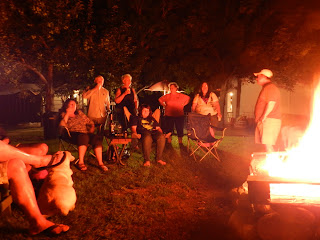 The Paulsen's son, Robert, built and carefully tended a wonderful fire which provided warmth and beauty as night descended around the group. 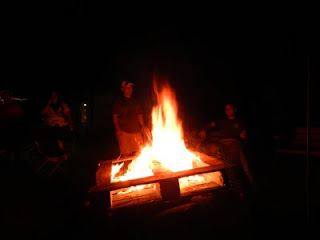 After a short while, Leslie appeared with award certificates and prizes and proceded to announce the winners. 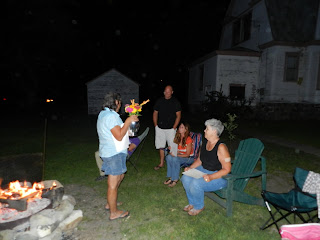 Everyone was presented with a Certificate of Participation with the two main prizes going to Jody for the "best presentation award" and to Tami for the "best taste award." Tami also received the most points overall, so she received a special "Award of Excellence." 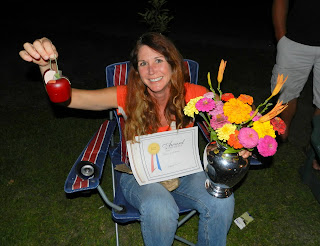 Believe it or not, I won a special award and prize, too - the booby prize! I think they felt sorry for because I didn't know about the presentation aspect of the contest, and it was my first time to make apple pie. Anyway, I won a cute little yellow chicken that goes "clickety-click" as it walks across the floor. (I think I'm supposed to bring it back next year for the next booby prize winner!) 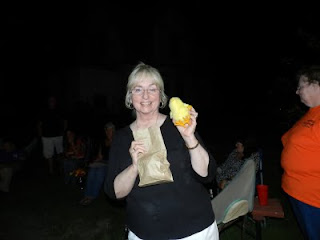 Now, if you haven't had liquid apple pie before, I'm going to give you an average recipe which you can play around with until it satisfies your taste and you make it your own. It goes something like this: 1 gallon of apple cider, 1 gallon of apple juice, 4 cups sugar, 8 cinnamon sticks, 1 (750 milliliter) bottle of 190 proof Everclear alcohol. Mix together all ingredients except the alcohol, bring to a boil and simmer for as long as you like. Then when the mixture cools completely, add the alcohol. If you're interested in making apple pie, you can find all kind of variations of this recipe at AllRecipes.Com http://allrecipes.com/Recipe/apple-pie-2/detail.aspx.


All in all, we had such a great time at the 2nd Annual Apple Pie Smack Down that the Paulsen's are thinking of opening up the contest to the whole community next year! So... if you're interested in coming to the festivities, start working on your own apple pie recipe for the 3rd Annual Apple Pie Contest!