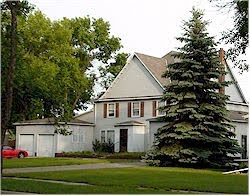 Carrington, ND Home For Sale By Owner - Owners.com Real Estate
This house has quite a history. It was built in the early 1900's and was built to last! The foundation, wood and overall structure are amazing. To begin with, it was used as a carriage house and servants' quarters for the mansion that was removed (due to a fire and lack of care). The owner (before us) was Aldo Lee, who completely remodeled the main floor and turned it into two complete, very nice 3bedroom/2bath units with over 1200 square feet each. Yes, the house is BIG!!

Interestingly enough, the second story used to have four fully functioning apartments. Somewhere along the line, perhaps when Aldo Lee remodeled the main floor, the plumbing was dismantled, and they became used as storage. The apartment structure is still totally there with each apartment having a bedroom, bath, kitchen and living room - all ready for some handy person to fix up and rent out!

At the moment my husband and I are in the mood to sell, but that may change, as we may sell our main house and move into one of the units ourselves, so don't be surprised if this house doesn't stay on the market much longer. We are in one of those big decision making periods of life when one makes rather big changes. You know what that's like! We are older and traveling a lot due to my husband's business, so we are consolidating our responsibilites so we don't have as much to worry about when we're away. We want to sell either this duplex or the beautiful Victorian that we now live in. Which one... the duplex... or the Victorian... Mmmm...... Have you ever been in a situation like this when it's hard to make up your mind? I'm sure you have! At the moment, if someone buys the duplex, we will stay in the Victorian. Otherwise, as I said, we will sell the Victorian and move into one of the duplex units. We've decided that we just don't need two big houses to maintain!

If we move into the duplex, that will make one less rental unit for Carrington. As you must know, it's very difficult to get a rental here nowadays. We have been able to rent our units consistently since we bought the house. In fact, we usually have a waiting list, with people calling quite often to ask about their availability. We rent the units out for $450, but we could get $500/550 if we needed to (information for someone who wants to make more money on them!).

This house has actually been a good investment for us... and could be even better if we had the time and energy to fix up the second floor of apartments. We could pull in around $2,000 a month if we wanted to work on it. But, that may be a project for some other person who has more energy/skills and wants to take it off our hands. We are in the mood to wait a little longer and see if that special person shows up.

So far, we haven't advertised our house in the newspaper or given it to a realtor. I thought I would give Foster County locals a chance to think about it first. Then later, if we still really want to sell it, we will seriously advertise it. At that point, I don't think it will last very long on the market, since it is truly a great investment for the right person.
Posted by Judy Keller at 8:31 PM 1 comment: Links to this post