Paul Murphy Accuses Commissioners of Political Paybacks. As Usual, He Offers No Facts To Support His Accusation.

Take a look at Paul Murphy's recent press release which states that he wants to be Foster County State's Attorney AGAIN.  As you remember, he was our Foster County State's Attorney who abruptly quit when the commissioners questioned his ability to do his job.  Not only had the county lost $15,000 directly because of his unlawful advice, but the commission was tired of Mr. Murphy not getting back to them with answers to their legal questions.  He often did not attend the commission meetings, and when he did, he seemed unsure of the law, said he would get back to them with information, and seldom followed through with providing the legal support that they needed to run the county efficiently.

In Murphy's press release, he accuses the commissioners of doing a "bad job of governing."  Ironically, it is Murphy's own poor performance as a State's Attorney that was a catalyst for any bad government that took place.  In one instance, he even encouraged the commission to break the law, saying that any repercussions would be taken care of by the County's insurance.

When Mr. Murphy did attend commission meetings, he would normally sit silently involved with his cellphone, or when asked a question, he would ramble on rather ambiguously without giving any concrete answers with legal authority.  A good example of Murphy's ambiguity is in his press release when he accuses certain commissioners of "reckless spending, political paybacks and possibly nepotism."  Where are the FACTS to support his serious allegations? Is he referring to Josh Dreher, Roger Gussiaas, Pat Copenhaver - or all of them? He just throws these accusations out there, without any details or facts, obviously trying to paint a "bad" picture of the commissioners.  Who wants a State's Attorney like this who INSINUATES bad actions without offering proof?

If necessary, we'd be happy to retrieve Murphy's outgoing statements and press releases from January when he quit.  In those, he claimed that he has a very successful private practice to attend to without all the headaches of being State's Attorney. Could it be possible that his private practice was just as unsuccessful as the one he did for the County, and he is missing the regular salary-with-benefits which we taxpayers provided?

It is interesting that Murphy served 12 plus years as a prosecutor for Foster County, and in those years it has been reported that he won only one single criminal jury trial.  That's quite a record for 12 years.

A better question is... how many times did Paul walk away in defeat? 90%? 95%?  One needs to look at his record and compare that to prosecuting attorneys across the country.  He does have a similar win/loss ratio of all the other prosecutors.  It's just IN REVERSE.  It's too bad that he abruptly resigned after winning his first criminal jury trial, because if someone inquired as to his record as a prosecutor, he could have said his criminal jury trial record was perfect.

Sad to say, Paul Murphy will be elected because he is running unopposed.  If only one person votes for him, he will win.  Fortunately there is a way to prevent our EX-State's Attorney from obtaining office again.  That is to vote in favor of having the State's Attorney's position in Foster County be APPOINTED instead of elected. A vote in favor of this measure (which is on the June primary ballot) is a vote against Paul Murphy.

Posted by Judy Keller at 9:08 AM No comments: Links to this post

Foster County's BELIEVE IT OR NOT! 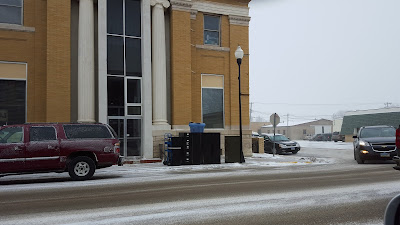 Ex-Foster-County-State's-Attorney Paul Murphy wants his old job back and has applied to run for that office in the coming election.

How can anybody forget our old State's Attorney Paul Murphy and how he left office?

As you remember, Murphy was the one who abruptly quit because the commissioners were wondering why he wasn't responsible for the $15,000 loss on the county shop project. His counsel to the commissioners in regard to the shop project was that it was okay to break the law because they had insurance to cover it. Unfortunately, the insurance failed to cover the loss, and Foster County was out $15,000.

When confronted by Commissioners Dreher and Gussiaas about the shop fiasco as well as his other incompetent actions or lack of action, Murphy stormed out of the meeting and tendered his resignation - effective immediately. In other words, he was so unconcerned with the welfare of the citizens of Foster County that he left us with no state's attorney.

Murphy also decided to push all the County's legal files and property out on the city sidewalk, completely unprotected to the elements and whatever incident that might harm them. Several citizens were appalled to see all the filing cabinets and loose files sitting out on the street with no one around to protect them.

At that time, Murphy also had no problem contacting every single news agency... talking about how Foster County was so hostile to him personally, and that he couldn't work under those circumstances.

It will be interesting to find out why Murphy has had a change of heart and why he thinks the commissioners will put up with his incompetence again in the future.
Posted by Judy Keller at 11:38 AM No comments: Links to this post