I woke up to see snow-covered trees outside my window this morning. I couldn't resist going outside to take pictures of our house in the new snow. For some reason or other, I just love the way our house looks covered in snow! It reminds me of an old-timey Christmas card... you know, like something from Currier and Ives. All our house needs is a frozen pond in front with people in colorful winter clothes merrily iceskating round and round and back and forth.

Actually, according to A History of Foster County which was published in 1983, there used to be a body of water called Willow Lake right in front of where my house stands on 1st Street today. There is even a picture of the lake on page 213 of this book - a book which was compiled by Lucile Zink and a dedicated committee of local historians.

Once I took way too many pictures of our house, I decided to take a walk around the neighborhood to see how our latest snow had treated the neighbors. It took me quite a while to slip and slide around the block, but I managed to get photos of most of the houses in our area. They all look so beautiful in the new snow!

Here are some of my favorite quotes and sayings about snow:

~ Whose woods these are I think I know. His house is in the village though; He will not see me stopping here. To watch his woods fill up with snow. ... ~ Robert Frost

~ The first fall of snow is not only an event, it is a magical event. You go to bed in one kind of a world and wake up in another quite different, and if this is not enchantment then where is it to be found? ~ J. B. Priestley

~ Oh! the snow, the beautiful snow, Filling the sky and earth below, Over the housetops, over the street, Over the heads of the people you meet. Dancing, Flirting, Skimming along. ~ J.W.Watson

~ Announced by all the trumpets of the sky, Arrives the snow, and, driving o'er the fields, Seems nowhere to alight: the whited air Hides hills and woods, the river, and the heaven, And veils the farmhouse at the garden's end. ~ Ralph Waldo Emerson

~ A lot of people like snow. I find it to be an unnecessary freezing of water. ~ Carl Reiner

~ A snowball in the face is surely the perfect beginning to a lasting friendship.~ Markus Zusak

~ To live anywhere in the world today and be against equality because of race or color is like living in Alaska and being against snow. ~ William Faulkner

~ Then come the wild weather, come sleet or come snow, we will stand by each other, however it blow. ~ Simon Dach

~Cleaning your house while your kids are still growing is like shoveling the walk before it stops snowing. ~ Phillis Diller

Posted by Judy Keller at 12:29 AM No comments: Links to this post

Lights Out in Carrington! 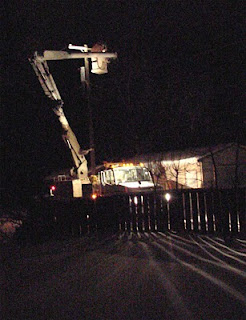 Thanks to the man at the top of this pole, we finally got our lights back on Monday night! You have to admire someone who has the skill and fortitude to do something like this - especially in sub-zero weather conditions!

Since we moved to Carrington five years ago, I've been bragging to friends around the country about the fact that we've never lost our power for more than a blink or two. Friends and family in California, Missouri and Tennessee have lost power for days at a time. Otter Tail Power Company has done a great job of keeping us warm in winter.

I called Otter Tail to find out the cause of the power outage, but no one was available to give any details. Friends who were watching the Vikings game with us at the time said that it looked like a transformer blew out. Whatever the cause, it made me realize just how important it is to have reliable power in a climate such as ours.

Lucky for us, we just had our gas fireplace overhauled by Rusty Sherman (Sherman Plumbing, Heating and Air), another guy who is great about fixing things in emergency situations like this. So, we still had heat while the power outage was being taken care of.

Thanks again to the hardy souls who took care of us on Monday night!
Posted by Judy Keller at 1:56 PM No comments: Links to this post

Christmas Around the Town

It was fun walking around town today, visiting shops and talking to people. Most of the downtown shops were prepared for this special "Christmas Around the Town" event. There was plenty of hot coffee, cider and treats for shoppers and visitors. Although the weather was rather brisk, lots of hardy North Dakotans were decked out in warm clothes and wandering in and out of the shops that were open. Everyone paused at 6:00 p.m. to watch the Light Parade go down Main Street. Although the parade was short, each float was dazzling! It was well worth the effort to attend this event and support the participants.

As I wandered through the shops, I met lots of people and took lots of pictures. Everyone was exceptionally friendly, and I sincerely want to thank them for letting me take their pictures for CarringtonNews.Com. I especially want to thank the ladies at Lovingly Used who let me borrow a pair of gloves while I filmed the parade. ( I had left my gloves at home and my fingers were too frozen to push the tiny camera buttons!)

I hope you enjoy the following slideshow. As soon as I figure out how to put my film of the parade on this blog, I'll include it, too!

Posted by Judy Keller at 11:37 PM No comments: Links to this post

If you haven't done so already, I would like to invite you to take a look throughout my website, CarringtonNews.Com. It's basically a guide to Carrington, North Dakota, and the surrounding areas - obviously not a real newspaper, like the Foster County Independent. It's a site that I do just for fun – not money. People are able to place free ads in the classified and real estate sections, and I don’t charge for links to business websites. Since blogs are so "in" nowadays, I guess you could call CarringtonNews.Com Judy Keller's Carrington, North Dakota Blog.

I love to take pictures of the area, and CarringtonNews.Com gives me a place to display my photos and make them available to the community. Just recently I took lots of pictures of the 100th Anniversary of the Foster County Courthouse, so whoever took part in that will most likely find a picture of him/herself online at my website. (Just click on the photo that you like, and it will take you to a larger image which you can download and save or print.) 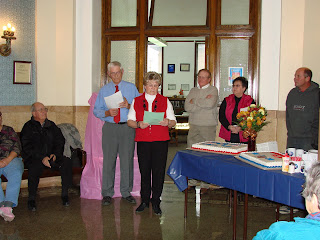 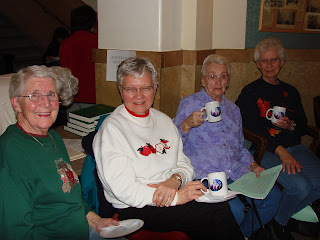 There are also 2010 pictures of the 4th of July parade, the Foster County Fair, the Youth Rodeo, the Carrington Library opening, the Cabin Fever Quilt Show, as well as LOADS of community photos from the past three years.

CarringtonNews.Com also gives people from across the United States and the world a chance to see what Carrington looks like and to see some of the fun activities that go on in our community. You might be surprised at how many people drop in to my website every day from all over the world. Although a website tracker doesn't tell me who is visiting my site, it does tell me their location in the world, and it's rather exciting to see visitors from faraway places, such as Switzerland, India, the Russian Federation, New Zealand, Japan, Romania, China, Israel, Iraq, Azerbaijan, Vietnam, Singapore, Morocco, Ukraine, Bahamas, Chile, and a multitude of other countries. In fact, I have frequent visitors from the Netherlands, South Africa, the United Kingdom, Canada, Australia, Mexico, Norway, Germany, France, Sweden, Italy and the Philippines. I sometimes wonder if someone in our community has relatives/friends from those areas in particular - since many of them come back again and again to check out what's happening here.

More and more, I receive messages from people (many of them who used to live in this area) who say they really appreciate CarringtonNews.Com. I would like to thank them for their phonecalls and e-mails because it encourages me to continue with something that I love to do.
Posted by Judy Keller at 6:52 PM No comments: Links to this post