What do you think of SA Murphy's advice to the Foster County commissioners?

The letter below is another example of State’s Attorney Paul Murphy's illegal advice, costing Foster County money once again.
Please understand that it was Mr. Murphy’s advice to former Commissioner Bill Bauer and the other commissioners that they proceed on the shop -- notwithstanding the law. He then repeated this advice to the current commissioners at the August 4, 2015, commission meeting.
Read the letter from Kelly Hagel's attorney and judge for yourself if Mr. Hagel has a case against Foster County. 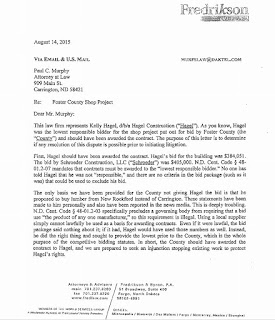 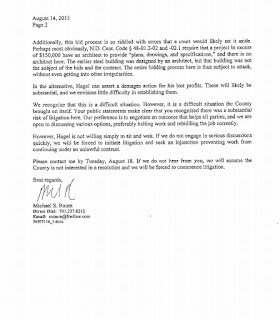 If this case is filed and Mr. Hagel prevails (which we believe he shall), he will most likely be awarded attorney’s fees. Our question to you, the taxpayers of Foster County, is who should be responsible for these attorney’s fees?
Is it Foster County's insurance policy once again? Is it the commissioners, themselves? Is it the taxpayers of Foster County? Or, is it the person who seems the most responsible, the person behind the bad legal advice, who encouraged the commissioners to break the law – our very own State’s Attorney Paul Murphy.
We invite any and all comments regarding Mr. Hagel's claim. Agreeably, shortcuts in the law on the surface make for a less expensive process. In the long run, however, they may be the paved road to Hell for a small county’s finances.
We ask the community what you think of this claim, and do you agree that this problem rests solely on State’s Attorney Paul Murphy’s bad advice to go ahead and violate the law?!
Posted by Judy Keller at 11:07 PM No comments: Links to this post

Coffee with Dolly Footitt (A Centenarian)

Dolly Footitt is one of my favorite people in the world... a very dear friend who will turn 101 years old on October 4, 2015. No one can ever believe that Dolly is that age... and you can see why when you listen to her on this tape. The sparkle in her eye and her quick, funny comments let you know that you're dealing with someone whose mind is sharp and ready to have fun with you.
This spur-of-the-moment tape came about one day when I was having coffee with Dolly. She is well-known in our Carrington community for sharing her wonderful pies, cookies and doughnuts with friends who come to her house for coffee. She also shares her goodies with her church, the hospital, the fair, the neighborhood and various fundraisers in the community.


Lucky for me, Dolly and I became great friends, so I often go to her house for coffee, and we chat about all kinds of subjects that are interesting to us. I've often thought about recording some of our conversations and sharing them with our community, because I think people are really missing out if they don't know Dolly. In addition to enjoying her personality, you can imagine the great storehouse of knowledge about our area that she has to offer.
After Dolly got such a kick out of this spur-of-the-moment recording, I've decided (with her permission) to record more coffee visits with her to share with everyone. If you have any special questions that you would like to ask Dolly, please let me know, and I'll record her answers for you.
So, here's to having fun with Dolly and hearing the opinion of someone who has lived for over a century!
Posted by Judy Keller at 12:08 PM No comments: Links to this post

I personally appeared before the Foster County Commission on Tuesday, August 4, 2015, to discuss the death threats which were texted to a county cell phone about Recorder Lynelle Hoppe on June 4, 2015.   I was, and still am, concerned about what is being done to address this situation.

The seven or eight ex-employees, who were discussing or "joking" about ways to kill Recorder Hoppe, no longer work for Foster County.  However,  one of the texters still works at the courthouse in an office located on the floor above Recorder Hoppe.

One would think that the employee would have been disciplined in some way right after the messages with death threats were discovered.   However, after Sheriff Mattice made his report to State's Attorney Paul Murphy, nothing seemed to happen.  It was as if the event did not take place.

However, since the issue of texted death threats was  published in the Foster County Independent, and published on CarringtonNews.com, I had had numerous inquiries from the public wanting to know the status of this investigation and/or prosecution.

So, on July 8, 2015, I decided to write some letters to find out what was going on and to shed some light on this situation.

I had already written a letter to Joel Lemer, since Ms. Hesch is his secretary, and sent a copy to the North Dakota State University Extension Office, his employer, but had received no response from them.  Since I had been led to believe that Ms. Hesch was also an employee of North Dakota State University,  I wrote a letter to the legal counsel of NDSU.  I enclosed copies of the texted death threats, as well as a copy of my letter to Joel Lemer and the NDSU Extension office.

That letter eventually ended up in the office of the North Dakota State Attorney General who replied (on July 27, 2015) that Melanie Hesch was NOT an employee of NDSU, that she was an employee of Foster County.  Therefore, NDSU's policies have nothing to do with this situation and  that it needed to be taken care of locally.

I also received a phone call from Governor Dalrymple's office and a letter from Representative Chet Pollert who expressed the same opinion as the Attorney General -- that the issue needed to be handled by the appropriate personnel in Foster County.

Then I received another letter from the State Attorney General's office.  This time they enclosed a "Letter of Concern" which had been written by Joel Lemer to Melanie Hesch on July 21, 2015 - over a month and a half since the death threats took place and almost two weeks after I wrote a letter to his boss, NDSU.  Mr. Lemer basically told Ms. Hesch that she could no longer text personal messages or use Facebook during office hours, that she would have to do that during her breaks.

Does anyone besides me think that is a rather weak consequence for texting death threats during office hours, or during any time, for that matter?!!

Since I did not receive any kind of response from the letters I wrote to State's Attorney Paul Murphy or the state's attorney to whom he had given the case, I decided to appear before the Foster County Commission to find out if the County was going to do anything at all about the death threats.

After all, I think the public has every right to know the facts about this situation.  As county taxpayers, we are paying the salary of Melanie Hesch, an employee who was texting death threats during her office hours when she was supposedly working on county business for us.


Watch the video to see the reactions of the commissioners and State's Attorney Paul Murphy.  Also, the meeting was taped by DakTel, so you can see the entire meeting on Channel 17 at various times during this week.
Posted by Judy Keller at 9:42 AM No comments: Links to this post