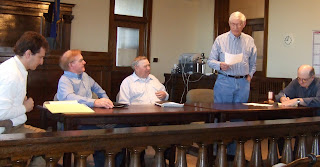 Justice prevailed today, January 28, 2009, in the Foster County Courtroom for Ted Keller and Leo Straley. Presiding Judge Greenwood granted their summary judgment against Foster County. He ordered that Foster County should provide them with copies of the 346 letters that Commissioner Carr said that he had from the community in support of the Van Bedaf mega-dairy locating near Carrington.

In March, 2008, when the Carrington community was debating the issue of allowing the Van Bedaf mega-dairy to locate so near Carrington, Commissioner Carr stated that he had 346 personal letters from businesses and members of the community in support of the dairy being established here. He used his supposed possession of these letters to sway the other commissioners to vote in favor of accepting the Van Bedaf application for a permit to operate 2 1/2 miles from town. Nearby established families and farms, as well as many Carrington residents, were worried about the smell and health hazards of a 20 million gallon manure lagoon being so close to them.

Interestingly enough, when Ted Keller and Leo Straley asked to see the 346 letters, the County refused access to them... even though they were part of a public record used to influence the other commissioners and the community. Foster County had already been sanctioned by the Attorney General of North Dakota for not providing public information in a timely manner, so as a last resort, Keller and Straley decided to sue the County in order to get access to the letters.

It has taken the plaintiffs eight months to get information that should have been provided to them immediately. Because of the refusal and delay in producing the 346 letters, Keller, Straley and others have begun to question whether or not they truly exist. Or, if the letters do exist, are they well-writtten, well-thought-out letters like the ones which were written in opposition to the location of the mega-dairy. Or, as someone suggested, are they simply a form letter that customers signed when they bought gas/supplies from Commissioner Carr.

When Ted Keller and Leo Straley receive the letters from Foster County, they have agreed to publish them on CarringtonNews.Com so the community can see the number and quality. Judge Greenwood also ordered Foster County to reimburse the plaintiffs for the filing fee which they had to provide in order to sue the County.

Another court date was set for March 17th in order to hear a complaint that the Foster County Commissioners met in an unlawful, unannounced session to decide issues regarding the Van Bedaf mega-dairy.
Posted by Judy Keller at 9:48 PM