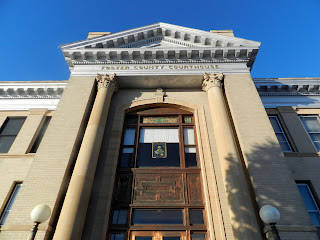 Note:  This article should have been posted on May 30, 2016, the day before the Foster County Commissioners Special Meeting on May 31st.  The results of the May 31, 2016 will be posted later.

Once again, the commission was instructed that something was legal or illegal  without quoting any statutory authority - notwithstanding the fact that no commission can be instructed by any State's Attorney to vote yes or no or not vote at all.

Apparently, thanks to misinformation, and their desire to have a States Attorney appointed and to have one resign, the commissioners voted on and appointed a State's Attorney (Paul Murphy) without noticing the public that it was their intention to do so.  Therein lies the problem.

6. In the event of emergency or special meetings of a governing body, the person calling such a meeting shall, in addition to the notices in subsection 4, also notify the public entity's official newspaper, if any, and any representatives of the news media which have requested to be so notified of such special or emergency meetings, of the time, place, date, and topics to be considered at the same time as such governing body's members are notified. If the public entity does not have an official newspaper, then it must notify the official newspaper of the county where its principal office or mailing address is located. TOPICS THAT MAY BE CONSIDERED AT AN EMERGENCY OR SPECIAL MEETING ARE LIMITED TO THOSE INCLUDED IN THE NOTICE.
[emphases added]

It is our understanding that one citizen was so incensed by this apparent shortcut, that he is intending to file  a complaint about this issue, if the commissioners do not rescind (annul) their vote and give proper notice before voting on the next State's Attorney. His objection will be heard at the next Special Meeting of the Foster County Commission on Tuesday, May 31, 2016.
Posted by Judy Keller at 10:04 AM