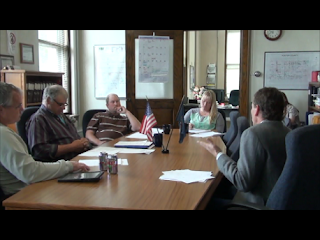 PAUL MURPHY - NO LONGER STATE'S ATTORNEY - AGAIN
After receiving a complaint from more than one citizen about the Special Meeting of May 26, 2016, not being properly noticed, Commissioner Josh Dreher called a Special Meeting on May 31, 2016, to address the notice issues.
All three commissioners attended, as well as the newly appointed State's Attorney Paul Murphy.
The meeting was called to order, and the chairman pointed out that the meeting of the 26th, which appointed Paul Murphy to his old position, was illegally noticed. The notice of the topic to be discussed was the open position of State's Attorney. There was not a notice that the meeting would "appoint" a State's Attorney. According to the ND Century code, all special meetings have to stay within the topics disclosed in the notice.
Chairman Dreher explained to the other two board members that the remedy would be to rescind (annul) the vote of May 26th. After some discussion and Commissioner Copenhaver's state of reluctance to correct the record, State's Attorney Ashley Lies was consulted by phone as to her opinion regarding the notice.
SA Lies stated that her review concluded that she agreed with Chairman Dreher that the notice was illegal. The solution for such an improper notice would be to rescind the vote and revote on it again. A motion was made which passed unanimously to do so.
A revote occurred with the result of the appointment of Murphy failing this time, because Commissioner Roger Gussiaas changed his vote to NO. He stated that he would like to have more choices and that he had had numerous phone calls in opposition to Murphy's appointment. Whereupon, Murphy inquired as to the names of the people who were in opposition to him.
Gussiaas objected to disclosing any names publicly and said that he would have them call Murphy personally if they chose to do so.
Murphy insisted and said that anything that the commissioners discussed regarding the county outside of the meeting is considered to be a public record.
At that point, Chairman Dreher pointed out that a telephone conversation and a personal chat with a citizen is not a record unless it is recorded or there is a written transcription of the conversation. He wanted to know why Murphy was insisting on knowing the names of the citizens.
Gussiaas restated that if people wanted Murphy to know what they said they could call Murphy personally. Gussiaas did not feel comfortable giving out the names of people who had discussed issues in a private conversation, and he refused to go along with Murphy's command to do so.
So, as it stands now, Ashley Lies is the only State's Attorney, and Paul Murphy is not. The matter will be taken up again at the next regular commission meeting on June 7, 2016.
Posted by Judy Keller at 8:26 PM