Read the following information that exposes State's Attorney Paul Murphy, and judge for yourself if he is fit to serve the citizens of Foster County. 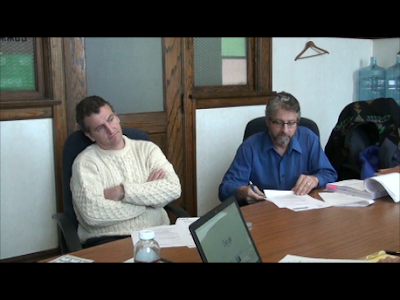 The following are two separate documents that were introduced into a filmed deposition of State's Attorney Paul Murphy, occurring on November 28, 2016, regarding a civil cause of action for libel (Ted Keller vs. Dean Tracy, Case No. 47-2016-CV00258).

Paul Murphy had no knowledge of the facts of the case, other than Dean Tracy libeled Ted Keller.  He was brought in to testify as to Keller's character. Unfortunately for Murphy, he did not realize that when you wish to testify as to someone's character, your own character and honesty can be examined.

Part one of the video concerns mostly Murphy's background.  The innocuous examination as to where he lived for his entire life is very important to the issues which are addressed in Document 2/Exhibit 3.

On or about April 11, 2012, then Griggs County State's Attorney Paul Murphy created and served a false Subpoena Dues Tecum  to Verizon Wireless (Document 1, Exhibit 2) by fax demanding a cell phone record that he claimed he owned.   The demand also included a demand for records for an additional cell phone that he claimed in the deposition that he didn't know who owned it or used it.  He claimed that he "had no idea of who it belonged to."  (See  Video 2/9:57)

Information has come out since the time of the discovery of these documents (by CarringtonNews.com) that the additional cell phone number belonged to the Griggs County Sheriff.

At that same time, Marina Spahr, then-wife of Murphy, worked as Griggs County Assistant State's Attorney.  More interesting is at this time there were rumors of a relationship between Murphy's wife, Spahr, and the Griggs County Sheriff.    Apparently, Spahr was using the target phone number for her personal cell phone number.

It's easy to see that the purpose of Murphy's subpoena was to obtain whom his wife called, whom she texted, whom she received texts from, and most importantly where she was at all times, as well as where the sheriff was at all times.   As clearly stated in the subpoena, Murphy attempted to use the power of his office as Griggs County State's Attorney to spy on his wife and her "friend."

During the deposition, when Murphy was questioned about the numerous obvious instances of fraud contained in this document (Document 1/Exhibit2), he objected and refused to answer... becoming quite irritated.  (See  Part 2 of the Paul Murphy/Foster County/YouTube video starting at 9:57)

This first document  (Document1/Exhibit 2) was the first of two false documents that Murphy used to spy on his wife and her "friend."

The second document (Document 2/Exhibit3) was issued fraudulently by Paul Murphy under the jurisdiction of the Spirit Lake Nation Tribal Court.  This document will be discussed later after we examine his first act of fraud upon the system.

Just look at a partial list of false statements contained in Document 1/Exhibit 2  in Griggs County State's Attorney Murphy's first attempt to spy on his wife and her “friend.” (Document1/Exhibit2)

1.     The heading of the Subpoena, claims that it is being issued under the authority of the “State of North Dakota, In the District.” No county or district is mentioned as to its origin.
2.     The Subpoena claims to be titled as “In re Paul Murphy.”  This case title directly conflicts with the paragraph directly above his signature in the document which attests "This is a civil litigation wherein the information requested is necessary for the prosecution of the case between Marina Spahr and Paul Murphy, Litigants respectively.”
3.     This statement about the litigation between Spahr and Murphy is also false because, according to Court records, the action between Spahr and Murphy under Case No. 02-2012-DM-00103 was not filed until September 17, 2012.  Although the date on Murphy’s signature is incorrectly stated as April 11, 2011, both the witness and the text in the demand reflect the correct year.  Therefore, his statement of a pending action is completely false since there was no action pending between these parties on April 11, 2012.
4.     The next fraud involves the case number in the subpoena which is stated as “2012-C-1599.”  Every North Dakota Court case number includes the number of the court district and county number.  Neither number is included in the case number because there is no such case on file, therefore no such case number.
5.     The next fraud and abuse upon the process of the Court is contained in his claim that he is acting on the authority of his office as Griggs County State's Attorney and the State of North Dakota.  Does the State's Attorney and the State of North Dakota have any interest in the divorce action between Murphy and this wife?  Better still, how can he be acting in the State's interest?
During the deposition' Murphy refused to admit or deny that he owned the cell phone number, citing his "no-relevance" objection.
6.     The next fraud by Murphy upon the State of North Dakota is his demand to Verizon for the production of records for cell number (701) 789-0100.  When asked about the additional cell phone that he wished to spy upon, he didn’t know who owned the cell phone.  It has been established that the cell phone belonged to the Sheriff of Griggs County.
7.     All of the responses to these requests were not to be sent to Griggs County State's Attorney Office in Cooperstown where his wife served and had an office as Griggs County State's Attorney.  Murphy commanded all responsive documents be sent to his office in Carrington.  One could conclude that he did not want his soon-to-be-ex-wife learning of his spying on her cell phone and that of her “friend,” the Griggs County Sheriff.
8.     Murphy also admonished and commanded Verizon under his authority as State's Attorney that the documents sought are “confidential… and should not be released to anyone other than the person requesting the information.”   To emphasize this point he made sure this part of his multi-subject paragraph above his signature, was placed in bold.
9.     Murphy’s demand again refers to his authority of his office by referring to himself in the plural tense in his statement that “We here by request that you fax the records to…”  Who is we?  Surely it is not the State of North Dakota and the District Court.
10.  The last proof of the fraud of this document is that the demand is made under the authority of the State of North Dakota and the Griggs County State's Attorney District Court, and yet he signs as “Paul Murphy (05166) Attorney at Law Pro Se”

Based upon all the inconsistent statements in Murphy's phony document (Document 1,Exhibit 2), Verizon may have questioned its validity.

Deposition Document 2/Exhibit “3” is Murphy’s next fraud upon Verizon, occurring on or around August, 2012.  In order to get the records he wanted, he apparently filed a divorce action against his wife in the Spirit Lake Tribal Court solely to once again spy on his soon to be ex-wife and the same other person.

Notice in the deposition Murphy was questioned at length about the fact that he never lived within the jurisdiction of Spirit Lake Reservation, and he was and is not a member of their tribe.  Using their jurisdiction was another  fraud.

It should be noted that Murphy knew that this was a fraud.  He had been states attorney for several counties and knew of jurisdictional issues which precluded him from filing any personal divorce issue in any tribal court.

Judge for yourself.  It is obvious that State's Attorney Murphy used his office and the resources of the tax payers of the State of North Dakota to spy upon his wife and her alleged lover. 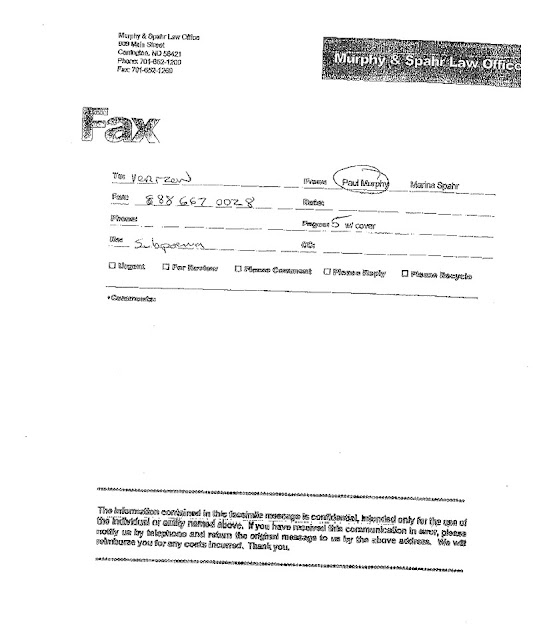 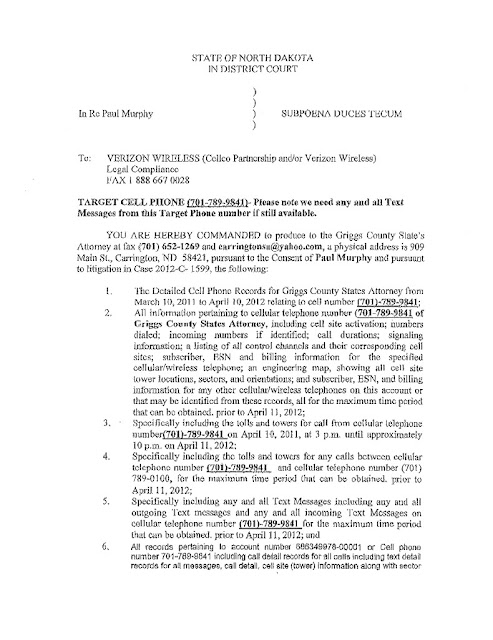 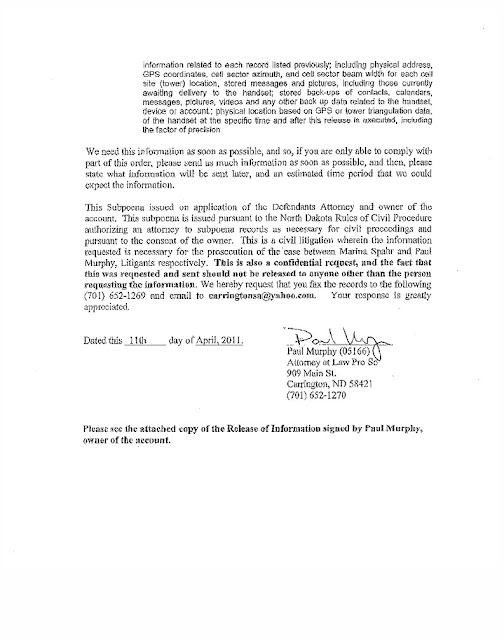 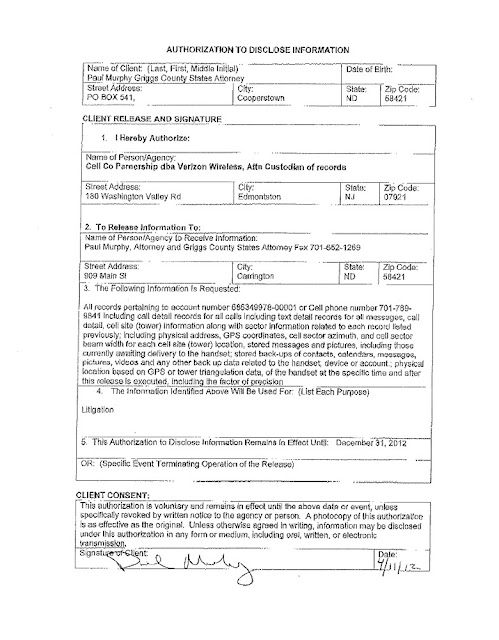 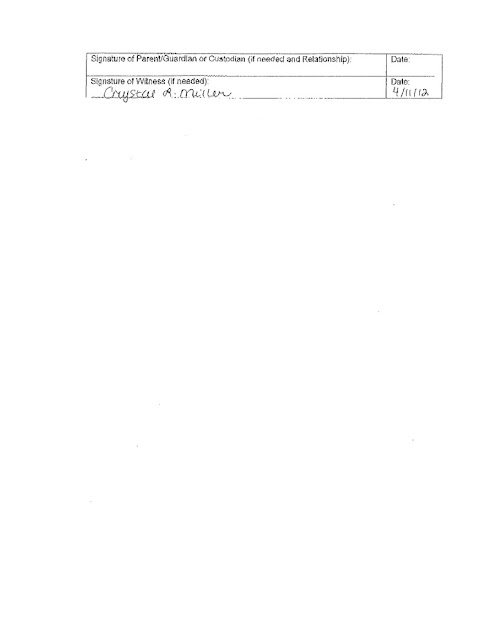 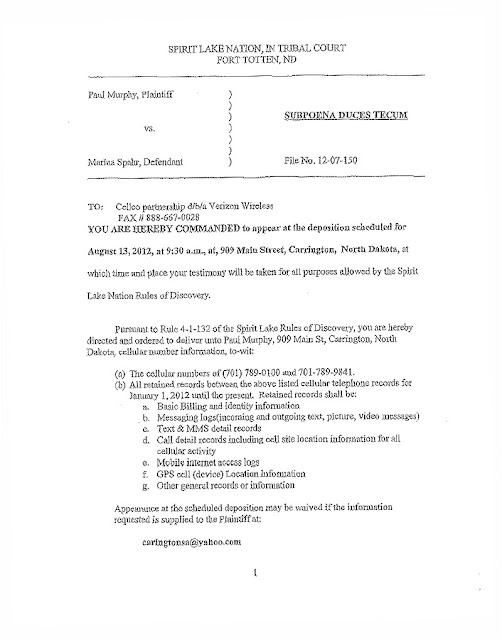 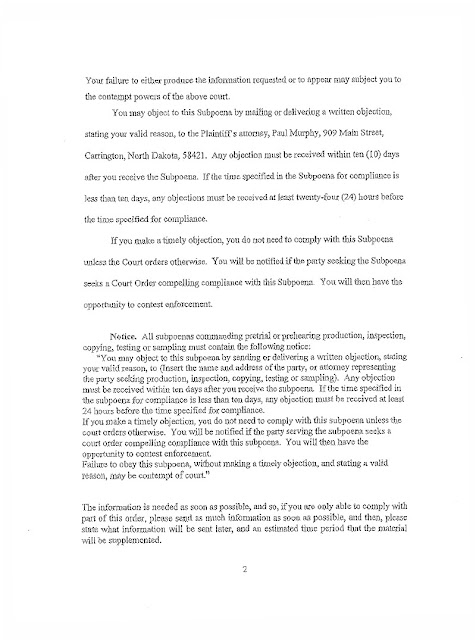 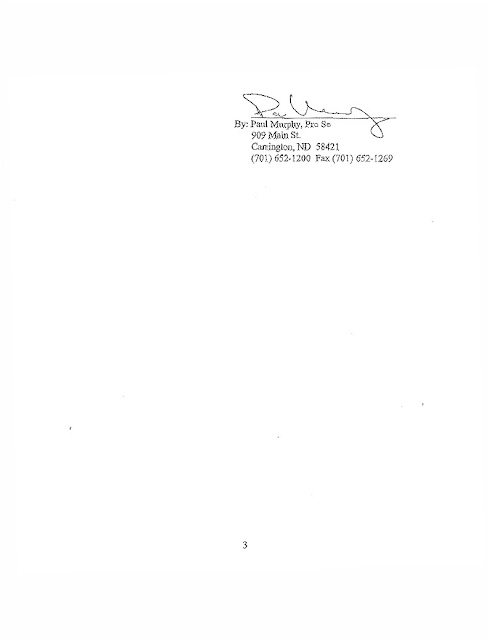