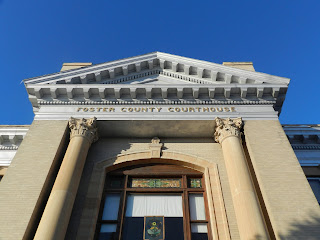 Thanks to Foster County Sheriff Johnson for calling our attention to recent scam calls. It seems like they just don't stop! If you click on the link to the ND Attorney General's site, you'll probably find examples of the type of call you've been getting.
I keep getting a robot voice saying that I have serious allegations against my name and that they will press charges against me if I don't return their call... and they actually leave a different phone number each time.

😡
Another call I received was about a niece (which they named) who was in a foreign country in jail who needed money for bail and to get home. I immediately called relatives on another line and was told that she was just fine at home in North Dakota. I guess a lot of grandparents are receiving this type of call... and they actually follow the directions and send money.
Most of the people I've interviewed say if they don't recognize the number, they don't answer the call... that if it's important, someone will leave a voice mail. Have you noticed that many scam callers are using local state area codes now, so you think the call might be from someone local? Tricky scamsters!!!
How do you handle calls like this? #carringtonnewsnd #scamcalls
Posted by Judy Keller at 10:59 PM No comments: 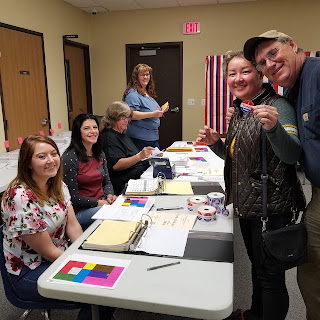 CONGRATULATIONS to Nurgul Gussiaas of Carrington as she casts her first vote as a United States citizen! What an exciting occasion! 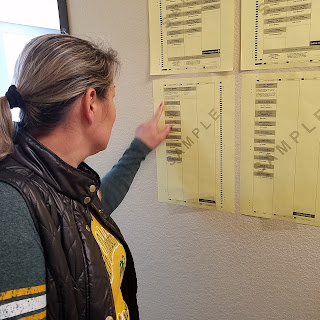 Also, thanks to Auditor Solberg for posting sample ballots on the walls which make it so much easier for voters to understand the Primary ballots.

As well, a huge THANKS to all the volunteers for helping today. You are all much appreciated!

Posted by Judy Keller at 8:00 PM No comments: 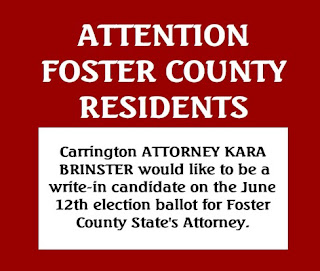 After numerous requests from Foster County residents, she has decided to campaign for the office. She mentioned that she is at a point in her life now where she feels comfortable that she can hold the office and do a good job for Foster County.

In order to vote for Kara at the polling booth tomorrow, be sure to fill in the bubble on the ballot and write in her name: KARA BRINSTER. Better still, you might want to take the correct spelling to the polls with you, so the vote is entered correctly.

From what we understand, Kara needs 27 or more votes in the primary election in order to be on the November ballot for Foster County State's Attorney.

Thanks to Kara, we now have another choice for this important office.

Remember: fill in the bubble and write KARA BRINSTER.

#carringtonnd#carringtonndnews #fostercounty
Posted by Judy Keller at 7:44 PM No comments: