These photos were taken on July 22, 2014 - the morning after a severe storm in Foster County, ND.  My friend, Dolly Footitt, and I took a drive from Carrington to Bordulac, and these were the scenes which we saw along the way.

Many best wishes to the farmers and others who reaped damages from this storm.  It has been reported that no one was hurt during the storm (Thank Goodness!), but there was a lot of property damage.  According to one of the weather stations, there were gusts of wind up to 80 miles per hour - straightline winds that can do as much damage as a tornado.

Hopefully, we will not have any other storms as serious as this one during the rest of the summer! 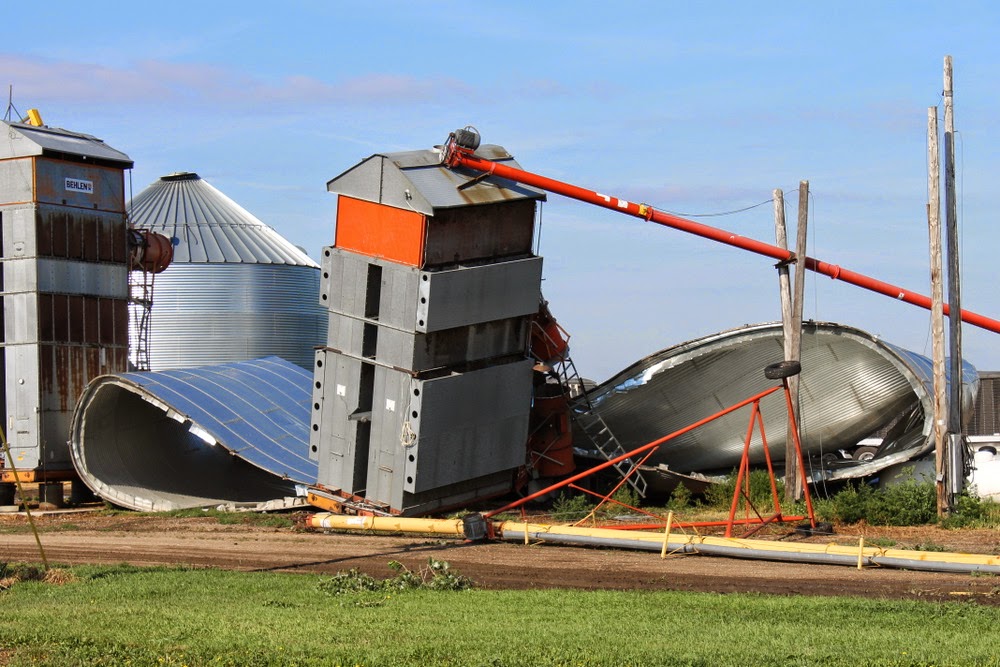 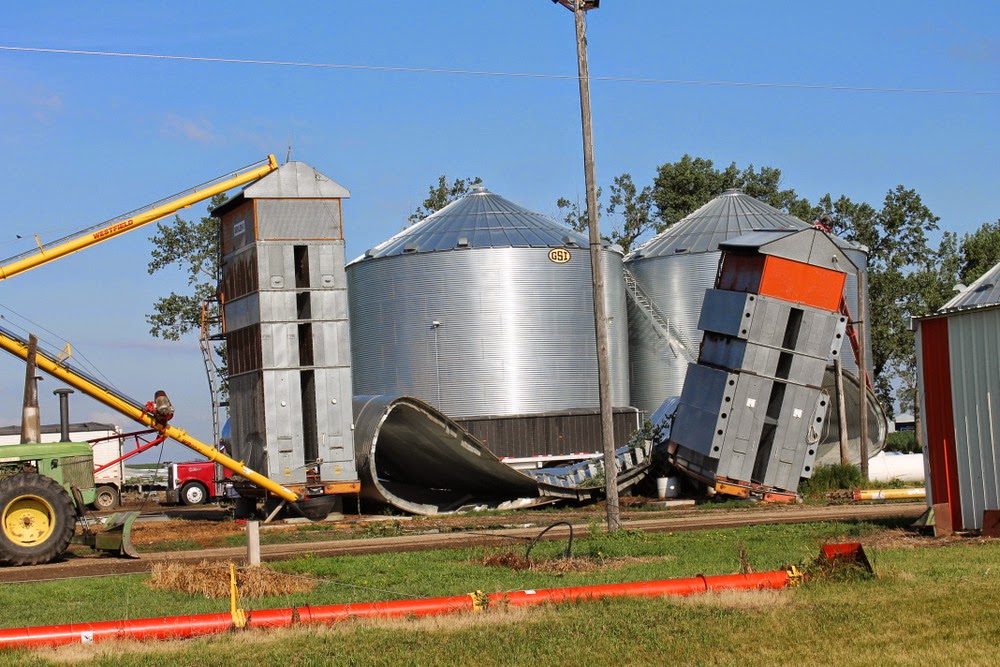 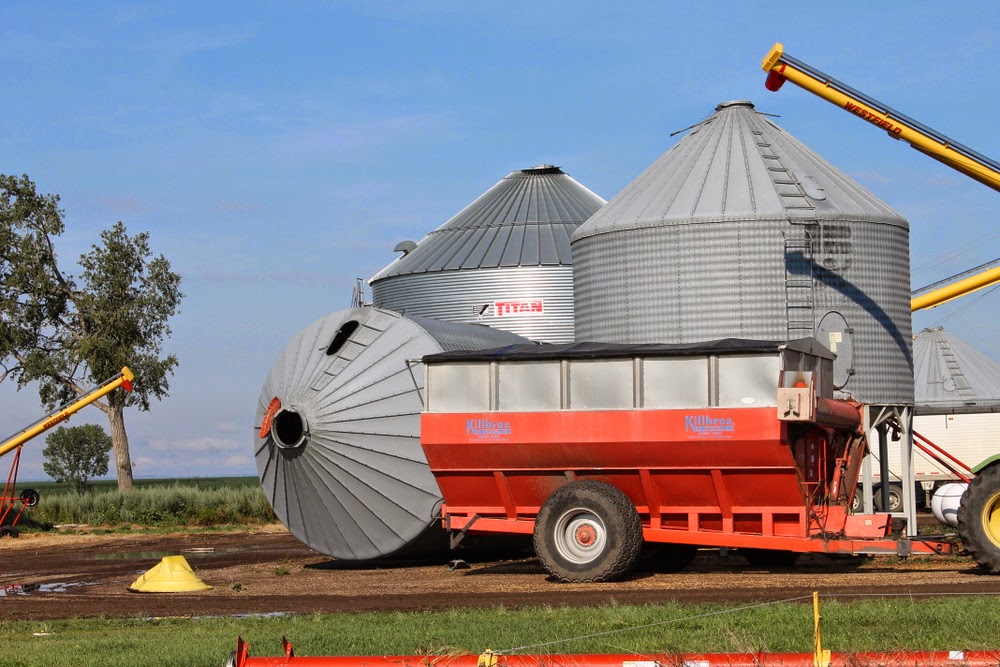 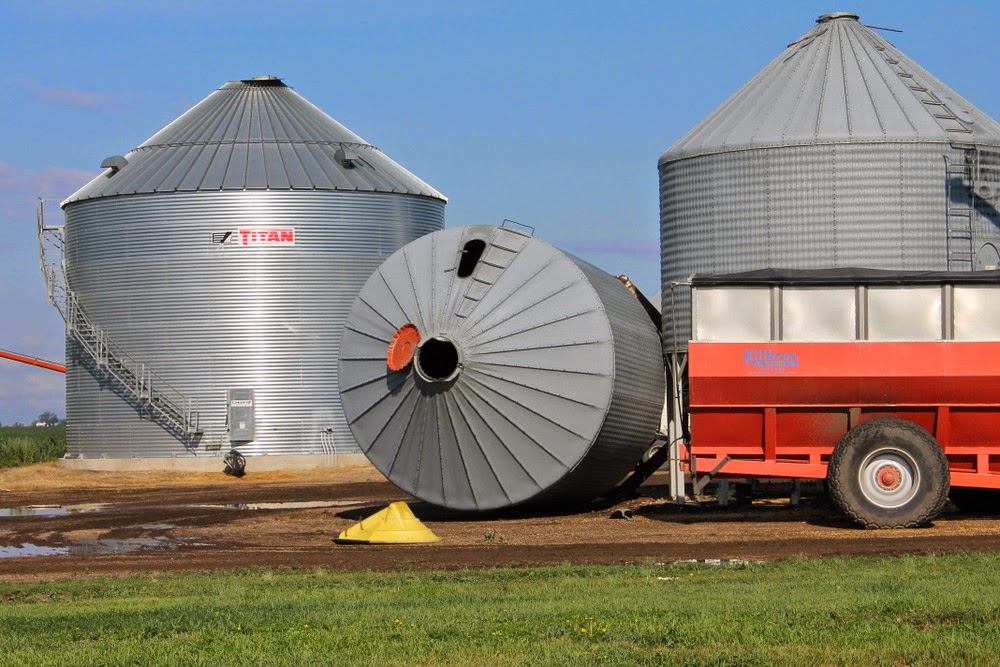 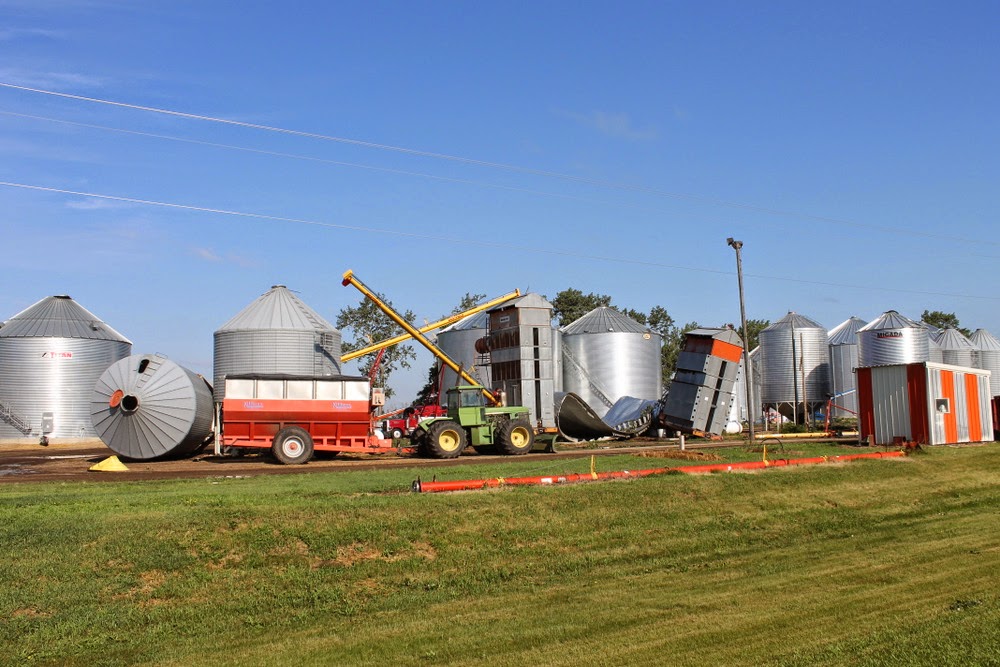 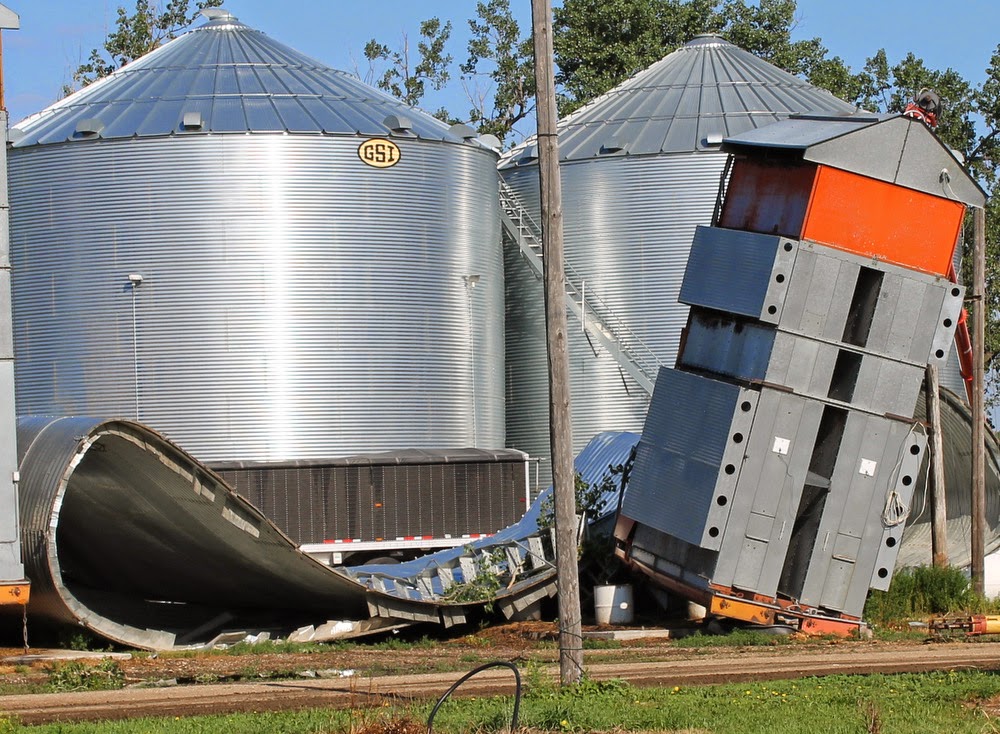 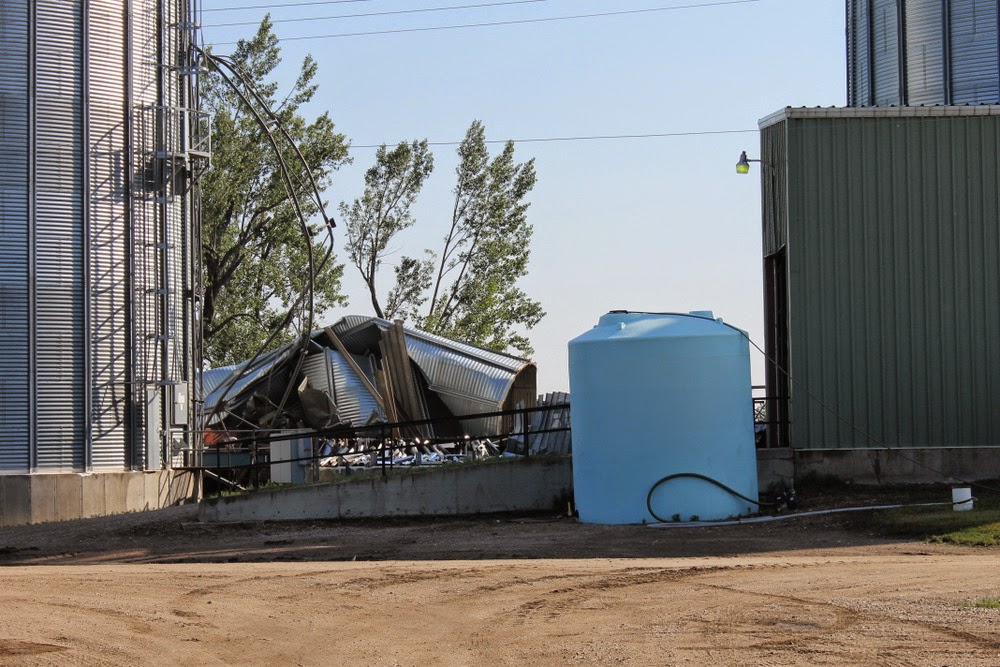 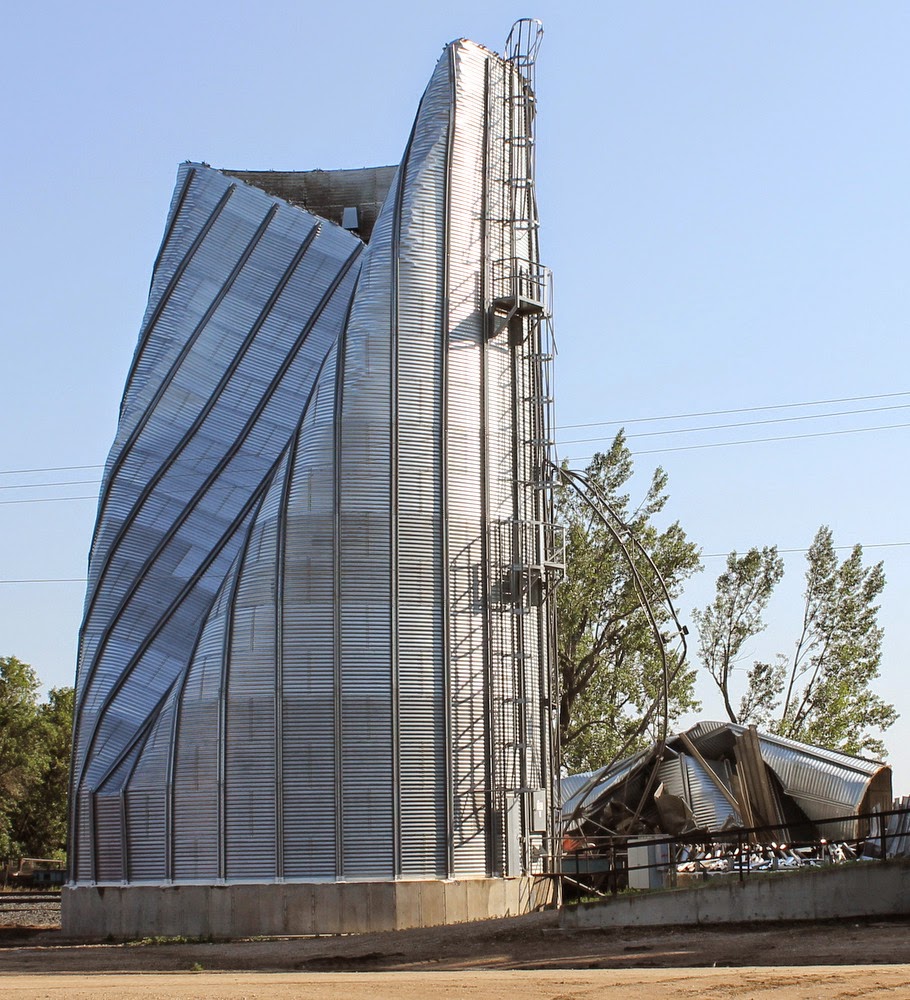 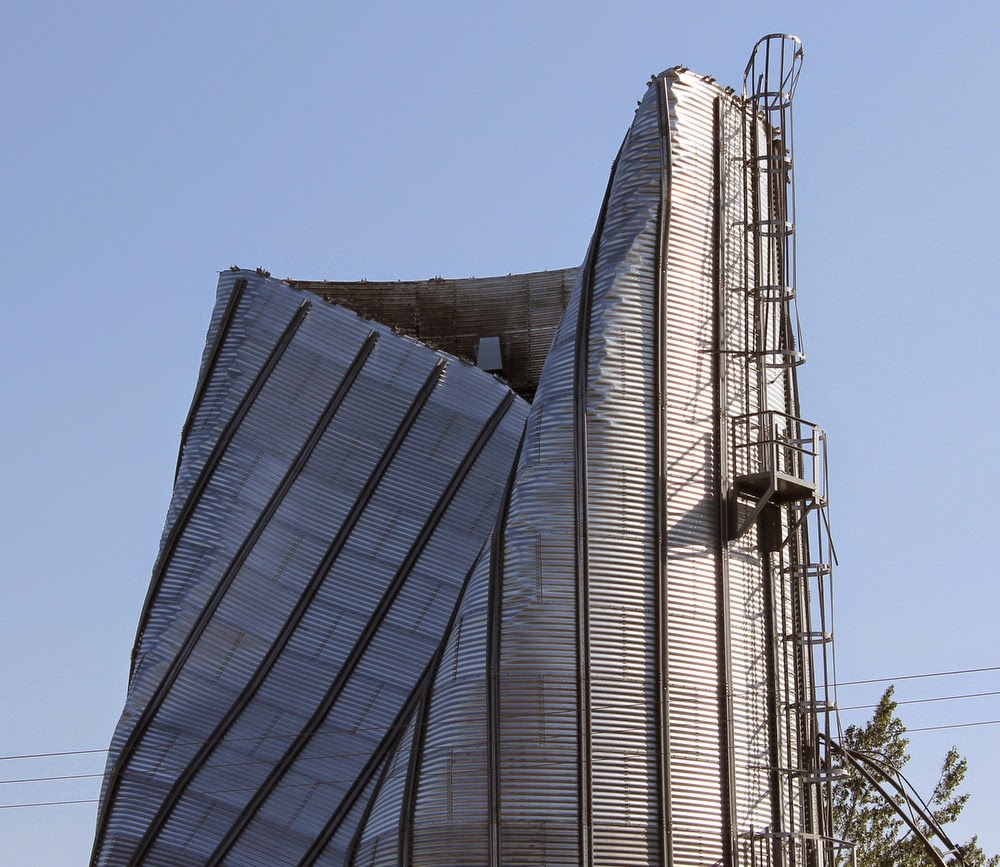 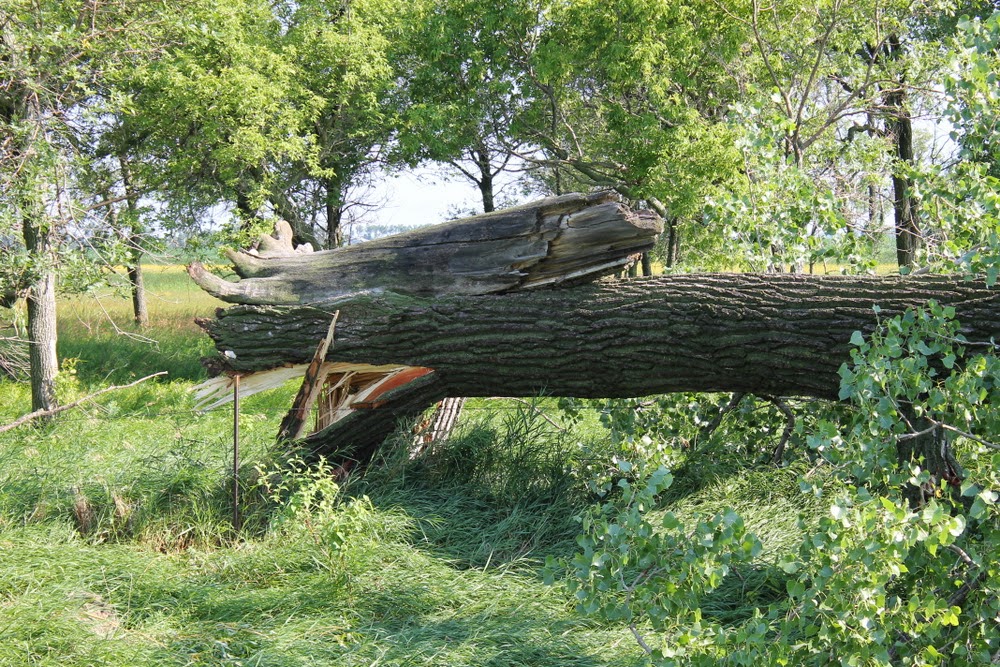 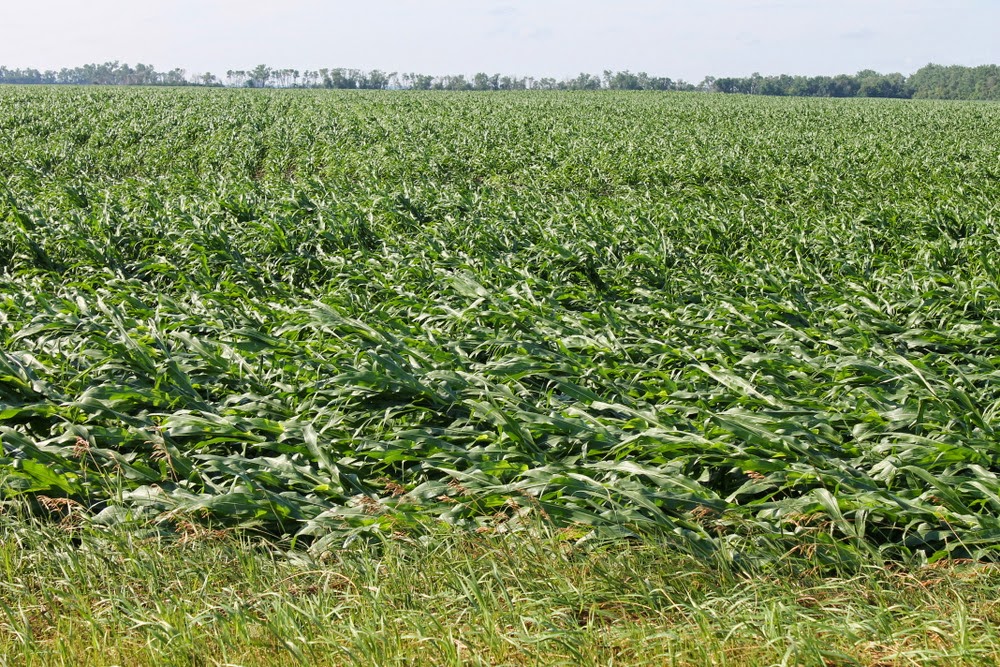 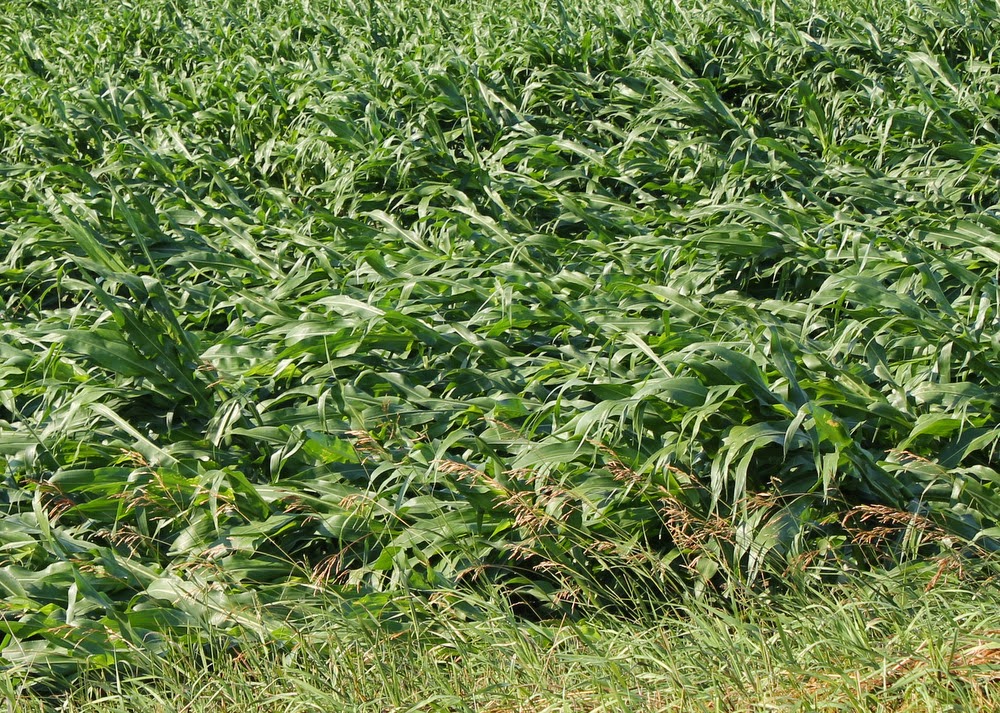 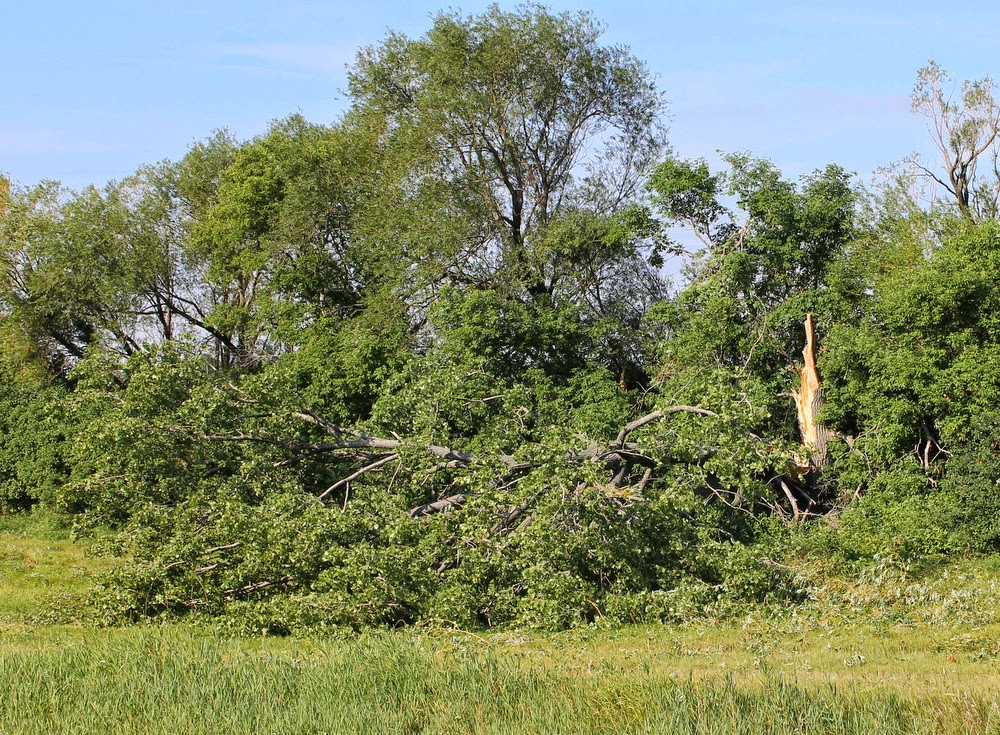 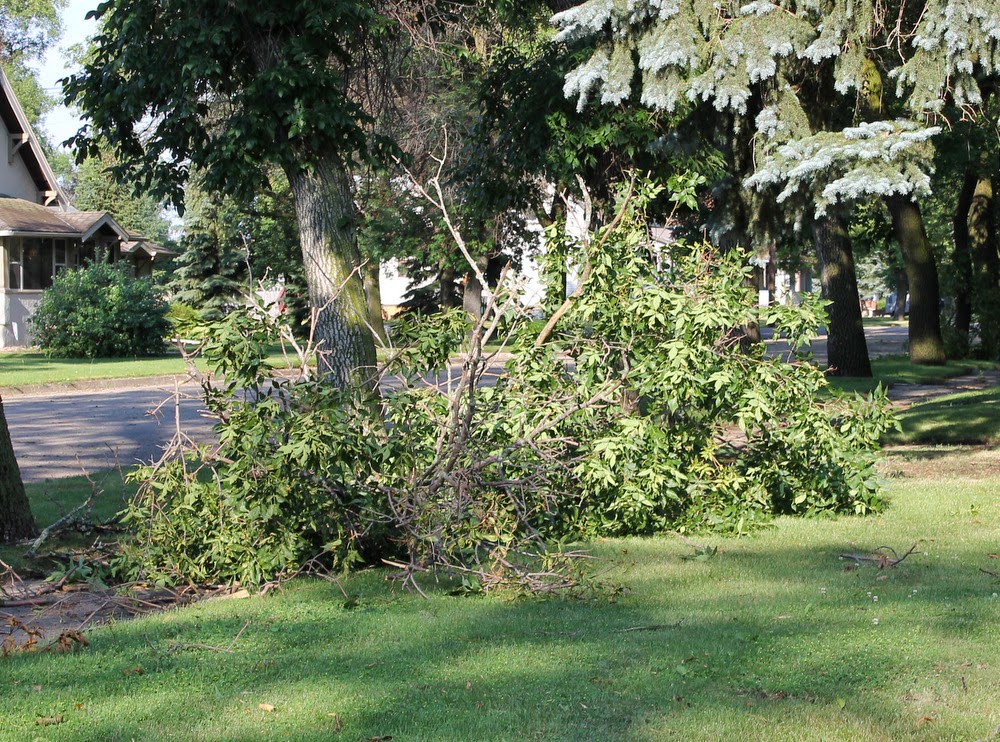 
The Fargo Forum posted an article about our local Foster County Primary Election.  It was basically a link to the original report by David Luessen from the Jamestown Sun published on July 11, 2014.

When the ND Secretary of State comments on a questionable election issue, it becomes more than local news. A letter from Secretary of State Al Jaeger to Foster County Auditor Teresa Risovi stated: "In order to revisit the alleged situation described above, the Canvassing Board must be reconvened according to N.D.C.C. 16.1-15-17 (enclosed). Then, if necessary, adjust the vote totals and resubmit a new certification to the State Canvassing Board."  Several newspapers are following this issue now, especially since the ND Bureau of Criminal Investigation was called in last week to investigate the issue surrounding the absentee ballots. 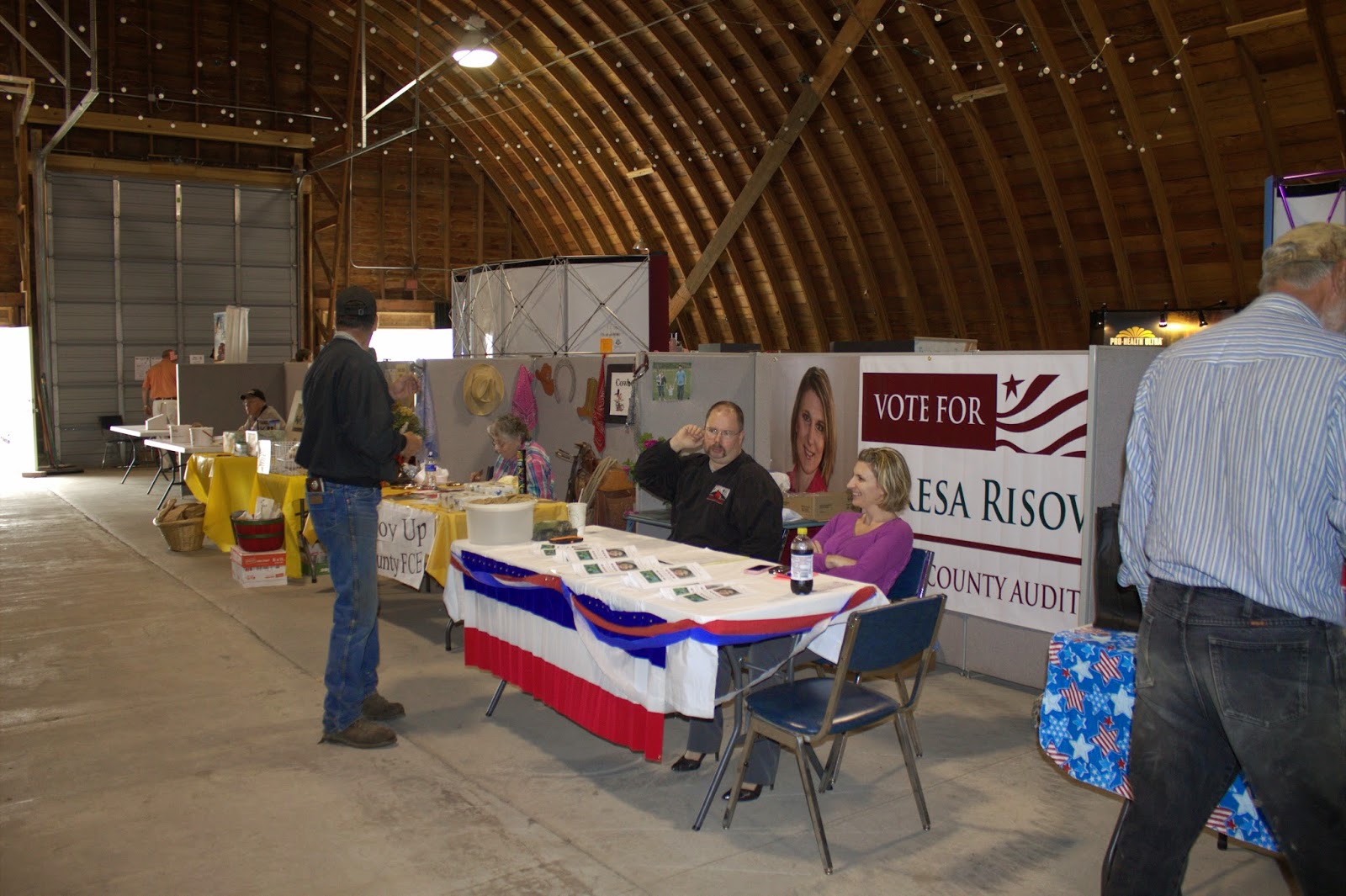 This picture was taken after the Primary Election at the Foster County Fair when Auditor Risovi took vacation days from her job to campaign for Foster County Auditor which comes up for a vote in the November election. (The Primary vote was Casey Cables/908 over Teresa Risovi/459.)

Posted by Judy Keller at 6:05 AM No comments:

﻿
In the face of possible election violations, Interim Auditor Risovi stated that the Canvassing Board did everything legally when accepting two absentee votes that lacked a signature on the application. According to Risovi, there was no violation of election laws in counting those ballots.

She continued to espouse that position even when Secretary of State Jaeger sent her a letter telling her that she "must" reconvene the Canvassing Board.

What puzzles this writer is that after the letter from Secretary of State was received by Risovi, she still defiantly stated that she wasn't going to reconvene the Canvassing Board.

Now, why the sudden change in her position?

You see, Risovi reconvened the Foster County Canvassing Board today, July 15th at 1:00 p.m. to vote on whether they should reconvene later to take another look at the absentee ballots in question - the ballots that the Election Board said were invalid.

Please note in the video that Chairman Straley abstained from voting due to a conflict of interest. Why didn't he do that at the first Canvassing Board meeting? Also, notice how Risovi declines to vote in face of a majority against her advocacy. If her position were founded on principle, integrity, and legality, why didn't she vote NO just to be on what she thought was the right side of the law?

Let's not forget that Auditor Teresa Dietrich Risovi is the one and only person, by the constitution of the state of North Dakota, who is in charge of our county election process. If the recent Foster County Primary Election is indicative of what little she knows about her duties as Auditor, we all need to take careful watch of her actions before her term ends.

Who knows what she will do next!

Posted by Judy Keller at 5:56 AM No comments:

This is the recorded phone call that I talked about in a previous article "Phone Calls Recorded at the Auditor's Office without Telling Callers."  We received this recorded call by way of a public records request from Foster County.

What is so interesting about this call is the fact that Auditor Risovi knew she was being recorded (on the first section of the tape), but State's Attorney Paul Murphy did not know she was recording their conversation.

Listen to how efficient she sounds to begin with, but as soon as Murphy voices some frustration with something she did, she attacks him verbally and threatens to go to Sheriff Tufte, if he doesn't show her some respect.  (One wonders what she expects Sheriff Tufte to do when she "tells on" the State's Attorney for being what she calls disrespectful.)  Murphy listens to the threat and simply hangs up on her.

You have to wait a minute to hear the next section of the tape.  In actuality, over seven minutes elapsed before the voice activated recording machine turned itself back on without Risovi knowing it. She was talking to someone with a deep male voice.  (One doubts if she knew this conversation was on the tape when she released it as part of the public request.)

In this last section of the tape, Auditor Risovi reveals her true nature, using profanity to describe the State's Attorney, and mean-mouthing his secretary.  This is a side of our auditor that the public needs to be aware of.  It emphasizes that negative aspect of her nature that can't refrain from flipping someone off in the Foster County Courtroom, or from profanely bawling out the local newspaper editor for printing her $50,000 salary on his front page, or from lying to get restraining orders against people who are critical of her incompetent actions in office.