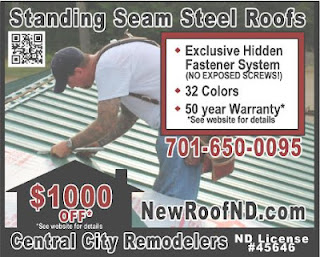 Every once in a while a new business makes a successful debut in Carrington, and Central City Remodelers is a good example of such a business. Actually, this is their second year of expansion, and what a year it has been for them!


The owners, Leo Straley and Ted Keller, made a critical decision to manufacture their own standing seam steel roofing panels, thus becoming one of the few companies in North Dakota to do so. In the process of perfecting their steel panels, Leo (an experienced metal worker from way back) invented a system that makes steel roofing even more leak resistant. Seeing that their steel roofs already have a 50 year warranty, his system means that the roof will most likely last the entire lifetime of the house with no leakage problems. This fact has impressed homeowners and builders all over the state, having a direct impact on the company's success. Being successful means that Ted keeps very busy traveling, meeting with builders, architects, and homeowners across North Dakota... and to other states as well.


In fact, Ted recently met with builders in Seattle who chose the H window for their multi-million dollar project. You see, in addition to roofing, Central City Remodeling is the exclusive ND dealer for the H Window Company, a company that makes windows and doors that are especially designed for harsh climates with intense weather extremes (sound a little like North Dakota?!). You may have seen the company's commercials, showing the H window flip completely around for easy cleaning. It has the highest wind-resistance performance of any window in the United States. In fact, the harder the wind blows, the tighter it seals! This being the case, the H window has become very popular with commercial and residential builders across the northern states.