North Dakotans Friendly/Helpful... Most of the Time 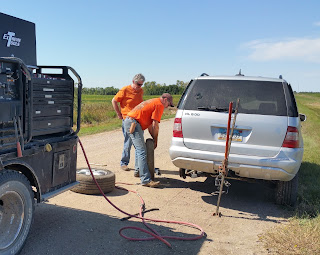 North Dakota is noted for the way people help each other out when troubles arise. We often see someone giving a helping hand to someone else who needs it at the time. Later, we might see the person who needed help passing on that positive energy to someone else in need. Most North Dakotans are good examples of the "paying forward" theory.
Today, when I had a flat tire in a precarious place on the way to Jamestown, I experienced the negative energy of a different kind of North Dakotan.... someone who criticizes instead of helps in a troubling situation. This person actually stopped to tell the farmer who was helping us that we were "causing a traffic jam" ... on a road where only one other car passed in the hour that we were there.
We had managed to limp our car away from traffic onto a graveled country road off the main highway . We made one call to a friend, a farmer who immediately left a busy part of his day, to come and help us. He parked his truck beside our car and was in the process of lifting a tire, when this intruder decided to stop his vehicle and criticize us.
Although we were double-parked on this country road, while fixing our tire, there was room for cars to pass us safely on the left. A kind person in a situation like this would have offered to help out or at least make sure that we were okay. In fact, the only other driver on that country road did just that, looked to make sure we were doing okay and then waved and passed on.
This negative fellow, however, had to stop and have words with our farmer/friend who was helping. I guess what bothers me most about this incident is the fact that we know the person who acted this way. The image that he cultivates in our community is one of being a kind, thoughtful person. In this case, he was not at all kind, and did not act the way a typical North Dakotan (or any kind person) would act.
By the way, while we were on the main highway, right after our tire blew, we were surprised to hear a voice coming from the nearby railroad track. There was a railroad inspector actually driving a truck along the tracks who stopped to see if he could help us in any way. We thanked him and explained that help was already on the way. After we assured him that we were okay, he drove on down the track. That man is the sort of person that we can rely on and depend on to help out ... especially in a state like ours where you can be stuck on the side of the road in below zero weather.
Thankfully, most North Dakotans are like the railroad man and our farmer/friend - ready to give a helping hand when needed.
Posted by Judy Keller at 12:06 PM No comments: Links to this post

Touching the Sun with Dolly Footitt 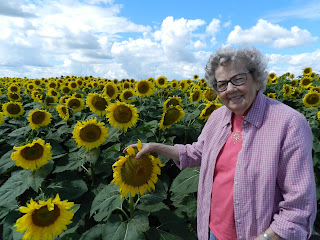 Here is my "most recent" favorite picture of my friend, Dolly Footitt, who will be 102 years old on October 4th.  Sunflowers are her favorite flowers, and as she says, "Touching a sunflower is like touching the sun..."   I'm very thrilled to say that this photo won the "Photo of the Day" award on the "Capture Dakota" photography website... all due to Dolly's sweetness, of course!

Dolly and I drove all around the Foster County area this last week, admiring all the crops and taking lots of pictures of them.  No matter how hard we tried to give attention to all the wonderful crops in our area, we mostly concentrated on the sunflowers.  We just couldn't stay away from them.  Even though it was rather hot and muggy, Dolly said she just had to get out and touch them.... so she did!

Here are a few more of the pictures that I took that day....   I especially like the ones with the Carrington Water Tower peeking above the field of sunflowers.  You can tell exactly where these fields are located since there is no other water tower in the state.. or the country, for that matter... with such a patriotic tower overlooking the city. 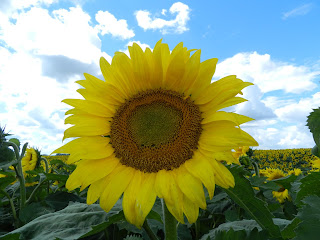 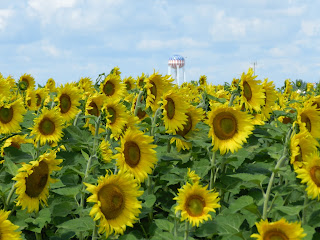 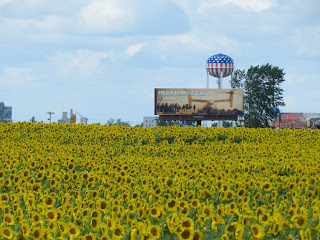 Posted by Judy Keller at 2:07 PM No comments: Links to this post

Young Hawks in Our Neighborhood 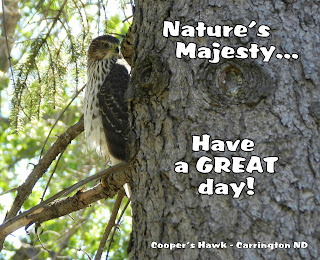 There are lots of young Cooper's Hawks flying around our Carrington neighborhood right now.  Sad to say, none of them were actually raised in the big tree in my front yard.  For three years a hawk couple came back to raise their little ones in the same nest nestled in the sturdy branches.  Time and the weather took its toll on the nest, however, and it's no longer a safe place for raising babies.

Even though the current young hawks weren't raised in my front yard, they seem to like my big trees.  They are constantly flying from limb to limb and swooping down onto the grass to play with each other and eat their prey.  Sad to say, for birdwatchers, the other birds have left the neighborhood.  They know better than to stay within reach of these hungry predators.

Posted by Judy Keller at 1:37 PM No comments: Links to this post